TruthRevolution envisions a utopia where finding the truth and speaking the Truth is not only permitted but encouraged. Where common sense, scientific method, and statistics are not repressed by PC. Once we know the scientific truth, once we are allowed to analyze the statistics, we can try to find the best solutions.

If black hair products are locked up, while hair products for non-blacks remains freely accessible to consumers on shelves in Walmart’s across America, it’s clear pattern recognition has been deployed by store managers or the corporate executives when it comes to frequency of black haircare products being stolen by customers or employees (shrinkage) [Source]

Instead, our PC world goes the opposite way, we now need to fiddle computer algorithms to prevent computer programs from finding the truth.

Previously on SBPDL:Black Councilwoman in Philadelphia pushes to ban bulletproof glass (Protecting Store Employees) because it represents an “Indignity” to Black People

Bulletproof glass is the greatest indicator the civil rights movement ushered in a great lie, replacing common sense measures to protect both private business, those employed by the business, and products sold within the store (cough… cough… Jim Crow).

Keep this in mind as we read about perhaps the greatest reminder why businesses should have the right to discriminate and the abdication by state to protect freedom of association ultimately dooms all retail stores in America to shuttering. [Walmart ‘segregated,’ locked up African-American hair products, lawsuit alleges, WCPO.com, 1-27-18]:[Source]

Malls are closing across America.

Retail stores are shuttering from sea to shining sea, leaving once thriving strip smalls nothing more than vacant eyesores.

The true causes must not be addressed, thus the stores must close

The demographic reality behind the collapse of malls, retail stores, and bankruptcy of retail chains is obviously correlated, though few people, if any, will publicly note this easily discernible truth. The same reason heavily black areas of America are food deserts is the exact same reason Walmart’s across the USA have managers whose spreadsheets denoting frequently stolen items compel them to add an extra layer of security to black haircare products.

This is the truth that must not be said because of institutionalized mandatory lies, because of repression of #TrueSpeech,  as described in SINCERITY.net

Without freedom of association (the ability to discriminate), retail stores across America will continue to close, with those staying open forced to put more and more of the products for sell behind locked glass.

A TruthRevolution, the permission to say the truth, to engage in #TrueSpeech, will lead to embarrassing analyses and politically very incorrect solutions.

If black hair products are locked up, while hair products for non-blacks remains freely accessible to consumers on shelves in Walmart’s across America, it’s clear pattern recognition has been deployed by store managers or the corporate executives when it comes to frequency of black haircare products being stolen by customers or employees (shrinkage) 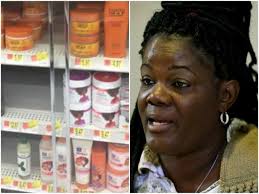 A California woman is suing Walmart, claiming that the store’s policy to lock certain products subject to a higher rate of shoplifting inside glass cases is racist.

Essie Grundy is taking a Walmart in Perris, California, to court, saying she felt like a second-class citizen because items popular with black customers were locked behind glass doors, CBS Los Angeles reported.

The simple factual truth is that these products get stolen more often. A color blind society thus will allow stores to make such decisions.  And the likely reason for the lockup is that Blacks tend to steal more frequently. This hypothesis can be tested with the scientific method.

If Walmart is gonna lock up hair products they need to do it for all of them not only the ethnic hair products pic.twitter.com/XcnajuNNsV