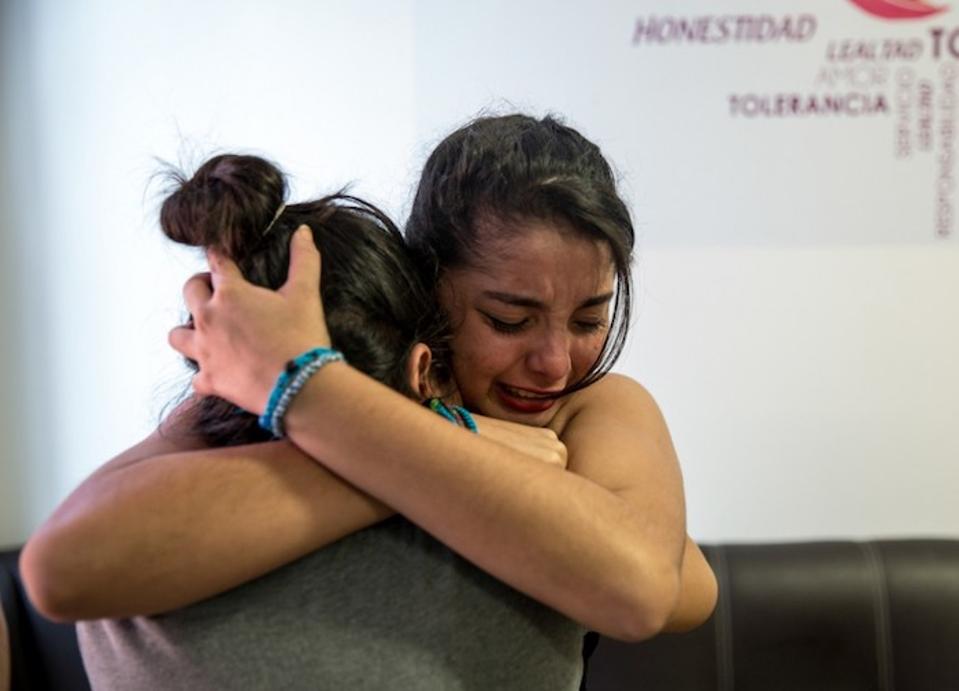 Central American girls say a tearful goodbye before being deported from a shelter for unaccompanied migrant children and teens in Reynosa, Mexico. © UNICEF/UN030689/ZEHBRAUSKAS

No Child Leaves Home Alone, Striking out for Parts Unknown, Unless They Feel They Have no Choice

Leaving behind everything and everyone they’ve ever known, thousands of young people each year make the heart-wrenching decision to set out alone from El Salvador, Guatemala, Honduras and Nicaragua on the dangerous journey to the U.S., hoping for a chance at a brighter future.

True, and sad. It is dishonest to avoid mentioning that responsible US parents do the same, spends lots of money in “white flight” leaves dangerous (black and immigrant) neighborhoods to give children a safe and happy childhood far from such dangers.

[…], yet there’s a constant flow of families without papers being escorted across the border by coyotes (human smugglers).

Dishonesty: “without papers”. Where did they lose their papers? Maybe they should pick them up. NO. They are breaking the law and illegally crossing an international border, subject to arrest. Parents recklessly endanger their children, exposing them to the following dangers

Along the way, many fall victim to trafficking, exploitation, violence and abuse at the hands of criminals or security forces, But still, they try. Because they want better opportunities, or they want to reunite with family already in the U.S. Because the drug cartels have taken over their hometowns, and staying means being forced to join a gang or to become the girlfriend of a gang member, or just living in constant fear.

En Route, Unaccompanied Child Migrants May Be Maimed, Molested, Enslaved by Child Traffickers or Even Killed

According to U.S. Customs and Border Protection, 37,450 children age 17 or younger, unaccompanied by their parents, were apprehended at the southwest border between October 1, 2017 and June 30, 2018.

But for many unaccompanied young migrants, the journey ends in Mexico, where they are intercepted by the government and detained in “closed-door shelters.” UNICEF regularly visits children and teens locked in these facilities to ensure that they are given learning materials, counseling, proper nutrition and health care.

On a recent visit, children in one shelter played a game, provided by UNICEF, modeled on Snakes & Ladders with real-life problems and solutions experienced by kids on the run. In another shelter, a teenager explained that he left Honduras because there was no chance of finding honest work in his hometown, which is completely controlled by drug traffickers.

[…]Murals at the Guatemala / Mexico border offer hope to migrants seeking safety and a better life. “Nothing on earth can stop us.” “With the inclusion and protection of immigrants, we all win.”© UNICEF USA

This is a total lie, not just dishonesty by omission. How would US families win by importing a criminality prone under class 7 and spending huge amounts of their tax dollars of about 4500 Euro per month per NAFRI 8

Dishonesty: discuss why do they have RIGHTS in other countries? if they have these RIGHTS they are the result of good hearted unselfish legislation, or, worse, legislation that was enacted deceptively, dishonestly, against the voter’s withes, or by misinformed voters.

Their parents are relieved to know that their children are alive. But they know that until the crushing poverty and pervasive violence that drove these young people to leave in the first place are addressed, many of them will try again, hoping to find work and safety and a better life. [Source of all quotes: How UNICEF Supports And Protects Child Migrants Every Step Of The Way]

All this is a noble intent, but it is hampered by false ideology, by scientifically wrong theory. Maybe “developing countries” can never be developed, because these populations never have developed a rich technological society. Maybe the low IQ and low self control and tendency to high crime rates does not allow that. Maybe these populations need their OWN political and legal system. During military dictatorship, it seems, brutal policing  kept street crime rates low and under control in such diverse countries as Ghaddafi’s Libya, Syria, Iraq, and Brazil.

Note that Anti-Racists are ethnocentric white supremacists: Anti-Racists believe that the social, political, legal, and educational system created by Whites in Europe and the US fits Iraq, Libya, Afghanistan, Zimbabwe sub-Saharan Africa, China, … Anti-Racist and leftist policies violently enforced such white systems onto these nations, and dishonestly hides the disastrous results.

Sexual abuse and harassment at Nordstan shopping centre have become so unbearable for female members of staff that some are considering giving up their jobs at the Gothenburg establishment.

Expressen reported on Tuesday that female staff members feel increasingly unsafe at work as they find themselves subjected to constant sexual harassment. Earlier this month the mall was labelled a ‘no-go zone’ due to out-of-control violence, theft, and drug dealing by gangs of unaccompanied migrants at the centre.

One thought on “Every child deserves a safe and happy childhood.”