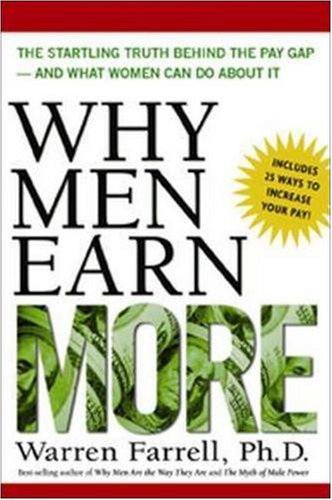 • Why Hazardous Jobs Can Be So Much Less Hazardous for Women (p. 31)
• The “Protection Dilemma”: The Warrior vs. the Worrier (p. 33)
• The Costs and Benefits of Choosing Safety (p. 35)
• Industrialization’s Unconscious Transition in a Mom’s way of Risking her Life (p. 35)
• How Men in the Hazardous Professions are their Own Worst Enemy (p. 36)
• Men’s Weakness As Their Façade Of Strength; Women’s Strength as Their Façade Of Weakness (p. 38)
• Our praise of our sons when they risk physical danger teaches our sons that being willing to be physically abused creates love. (p. 39)
• How to Make a Fortune in the Death Professions Without the Death or the Dirt (p.41)

• 3. Among jobs requiring little education, those that expose you to the sleet and heat pay more than those that are indoors and neat (Fed Ex delivery vs. receptionist) (p. 44)

• When Affirmative Action Marries Technology and Invites Women into the Family (p. 45)

• 4. In most fields with higher pay, you can’t psychologically check out at the end of the day (corporate attorney vs. librarian) (p. 47)

• 8. Some Jobs Pay More to Attract People to Unpleasant Environments Without Many People (prison guard vs. restaurant hostess) (p. 69)

• 12. Have More Years of Experience –Especially in Their Current Occupation (p.85)

• 13. Have More Years of Recent, Uninterrupted Experience with Their Current Employer (p.87)

• 17. Are More Willing to Relocate—Especially to Undesirable Locations at the Company’s Behest (p. 93)

• 19. Take on Different Responsibilities Even When Their Titles Are the Same (p. 104)

• 20. Take On Bigger Responsibilities Even When Their Job Titles Are the Same (p. 105)

• 22. Have More Relevant Training In Their Current Occupation (p. 108)

women should stop trying to play off "victim power" and start wielding their true earning power.

"Companies like I.B.M. have offered women scholarships to study engineering for years, and women engineers routinely get higher starting salaries than men," he said. NYT

Women, he believes, methodically engineer their own paltry pay. They choose psychically fulfilling jobs, like librarian or art historian, that attract enough applicants for the law of supply and demand to kick in and depress pay. They avoid well-paid but presumably risky work – hence, the paucity of women flying planes. And they tend to put in fewer hours than men – no small point, he says, because people who work 44 hours a week make almost twice as much as those who work 34 and are more likely to be promoted. NYT

The Census Bureau did find that women earned 76 cents for every dollar paid to a male (now up to 80 cents on the dollar), but that was a raw number, not adjusted for comparable jobs and responsibility. A new book, Why Men Earn More by Warren Farrell, goes further, examining a broad array of wage statistics. His conclusion: When reasonable adjustments are made, women earn just as much as men, and sometimes more.

Some of Farrell’s findings: Women are 15 times as likely as men to become top executives in major corporations before the age of 40. Never-married, college-educated males who work full time make only 85 percent of what comparable women earn. Female pay exceeds male pay in more than 80 different fields, 39 of them large fields that offer good jobs, like financial analyst, engineering manager, sales engineer, statistician, surveying and mapping technicians, agricultural and food scientists, and aerospace engineer. A female investment banker’s starting salary is 116 percent of a male’s. Part-time female workers make $1.10 for every $1 earned by part-time males.

Surprisingly, Farrell argues that comparable males and females have been earning similar salaries for decades, though the press has yet to notice. As long ago as the early 1980s, he writes, the U.S. Bureau of Labor Statistics found that companies paid men and women equal money when their titles and responsibilities were the same. In 1969, data from the American Council on Education showed that female professors who had never been married and had never published earned 145 percent of their male counterparts’ pay. Even during the 1950s, Farrell says, the gender pay gap for all never-married workers was less than 2 percent while never-married white women between 45 and 54 earned 106 percent of what their white male counterparts made.   USNews

Over 6 years ago, Warren Farrell debunked the pay gap myth and clearly explained all the reasons for income differences between men and women. Thus he gave all the means needed for women to not only close the pay gap but actually earn more and invert the pay gap.

Warren Farrell, the only man to have been elected three times to the National Organization for Women’s New York board of directors, is the author of such books as The Myth of Male Power and Why Men Are the Way They Are. In his new book, he argues that women earn less than men on average not because they are discriminated against, but because they have made lifestyle choices that affect their ability to earn. Why Men Earn More argues that although discrimination sometimes plays a part, both men and women unconsciously make trade-offs that affect how much they earn. Farrell clearly defines the 25 different workplace choices that affect incomes—including putting in more hours at work, taking riskier jobs or more hazardous assignments, being willing to change location, and training for technical jobs that involve less people contact—and provides readers with specific, research-supported ways for women to earn higher pay. Cato Institute

13 thoughts on “How women can earn more then men: 25 life choices to get higher pay”