George Zimmermann is almost forgotten by the press. It is hard to find recent info about the case of Trayvon Martin’s killing. The case is very important because it shows a strong divergence of opinions of whites versus blacks (and certain liberal whites).

George Zimmermann | Human-Stupidity. Many more links can be found in these articles.

If there was any indication that Zimmermann physically attacked Trayvon, we would agree that George Zimmermann should be tried for murder or manslaughter.

We are on Zimmermann’s side, because all indicates that George is telling the truth, that he was attacked by Martin. (is it not interesting that everyone calls Trayvon Martin by his first name (sounds back) and George Zimmermann by his last name (sounds white or Jewish)?

George Zimmermann is being threatened by vigilantes, has to go in hiding. He has huge legal costs to defend himself against the power of the state and of the entire civil rights movement . The threat of riots and government intervention are strong enough to intimidate judges and jurors.

Human Stupidity has focused on the pervasive attitude of Black entitlement 1 2. Zimmermann is considered guilty because

Defending our Friend; the Most Hated Man in America 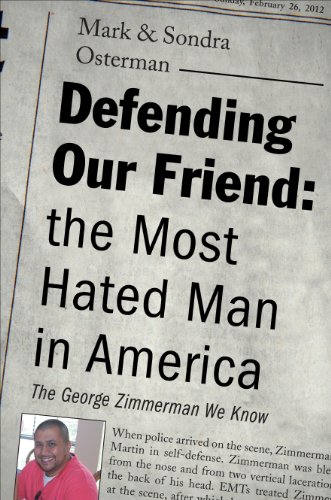 A well intended book, No Kindle version. To get an idea of the content, check out the authors getting taken apart at Dr. Phil, in the video below.

Mark Osterman was too dry a guy, too honest. He let himself clobber by Dr. Phil and Trayvon Martin’s step mother.

Lies the media told me

If you prefer watching a video instead of reading texts, here it is.

Pay attention from the 8:40 mark to the 10:10 mark. She said Trayvon lost Zimmerman for "a couple of minutes". She also said Trayvon was "going back", and "not going to run". Trayvon was also the first to speak before the altercation.
Playlist: http://www.youtube.com/playlist?list=PL4D8A6926315452AA
All the evidence, press releases and stuff, in more or less chronological order up till this point.
Call Log: http://www.4shared.com/office/KctzX400/trayvon-call-log.html
—

Obama said: If I had a son he would look like Trayvon Martin

So Trayvon Martin has been adopted by the president of the USA.

So we have this mythical narrative that a white man killed the son of the first black president of the United States.

Nancy cited, as absolute truth, what Trayvon’s girlfriend had said, weeks after the incident, primed by Trayvon’s lawyer. While, at the same time, showing a photo gallery of Trayvon Martin, mostly ages 4 years to 12 years.